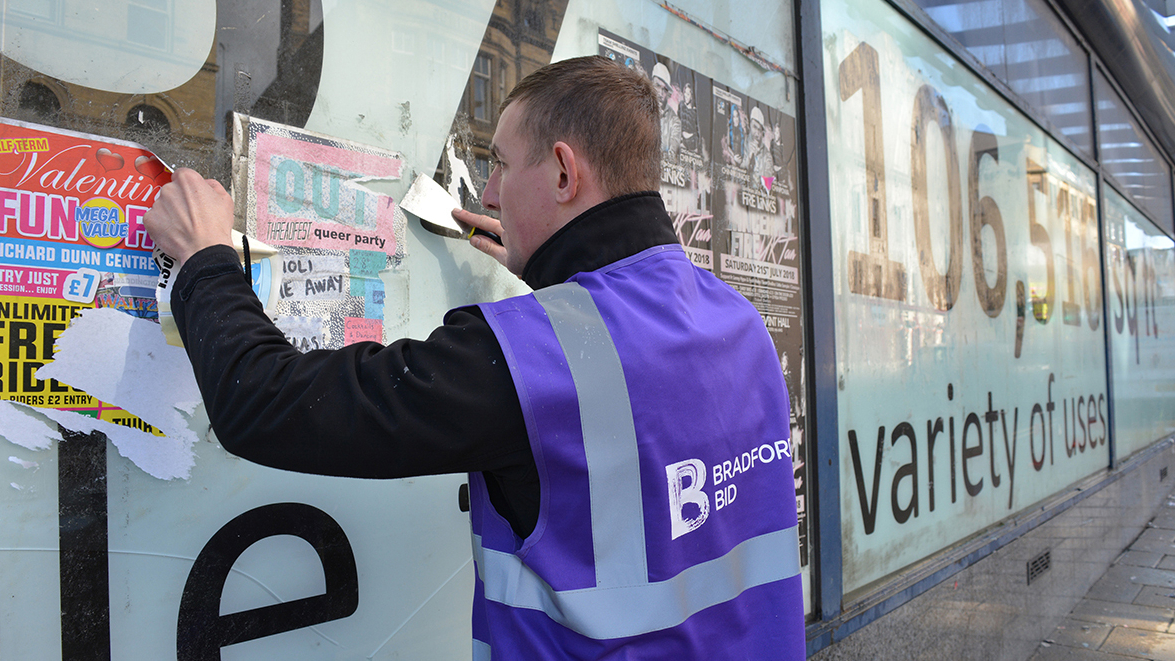 Bradford’s new Business Improvement District company has started a programme of works to improve the appearance of empty shops and offices in the city centre.

Fly-posting which plastered the windows of the Grade II-listed former TJ Hughes store (pictured), on the corner of Godwin Street and Sunbridge Road, has been removed in one of the first clean-up projects undertaken by the BID.

Improving the appearance of empty shops was identified as a top priority by businesses when the feasibility study into setting up the BID was carried out.

In all, 78 per cent of the businesses who took part said it wanted the BID to spend some of its levy funding on getting rid of fly-posting and graffiti and cleaning up empty properties to improve the image of the city centre.

The issue was made one of the key objectives in the Clean pillar, one of four strands that make up the BID’s five-year Business Plan.

“Clearly, the appearance of empty shops and the impact that shabby and untidy premises can have on the perception of the city centre is a major concern for Bradford businesses,” said BID manager Jonny Noble.

“They wanted us to make it an important part of the BID’s work and we’ve now got that underway with the smartening up of the former TJ Hughes store.

“This is one of the key gateways to the city centre and, potentially, one of the first things visitors see as they reach the centre from that side.

“It’s also next door to newly-developed offices which will become the home of a branch of a prestige business, PWC, which will eventually bring 220 new jobs to city centre.”

A local company, JD Cleaning, was contracted to clear up the mess.

“It really was in a bad way, with all of its display windows plastered with scruffy posters,” said Mr Noble. “I think anyone who passes it regularly will it agree it now looks a whole lot better!”

He said the fly-posting and graffiti removal project will now be rolled out strategically across the BID area and will be ongoing throughout its five-year term, which began in January.

Prior to being removed, all the posters are photographed and recorded for any potential enforcement action which could be taken against fly-posters by the local authority.

“The people who create this sort of mess and deface these buildings don’t realise the impact their actions have on the image and appearance of the city centre – and the damage that can cause to the livelihoods of those trying to make a living while providing an important service for the people of Bradford,” said Mr Noble.

The TJ Hughes store shut in August 2011 with the loss of 53 jobs, when most of the chain closed down after going into administration. Only six stores survived at the time but a new TJ Hughes store is set to open in the Kirkgate Centre next month. The cleaned-up building, known as Sunwin House, was originally built as a flagship store for the Co-op in 1935-6.