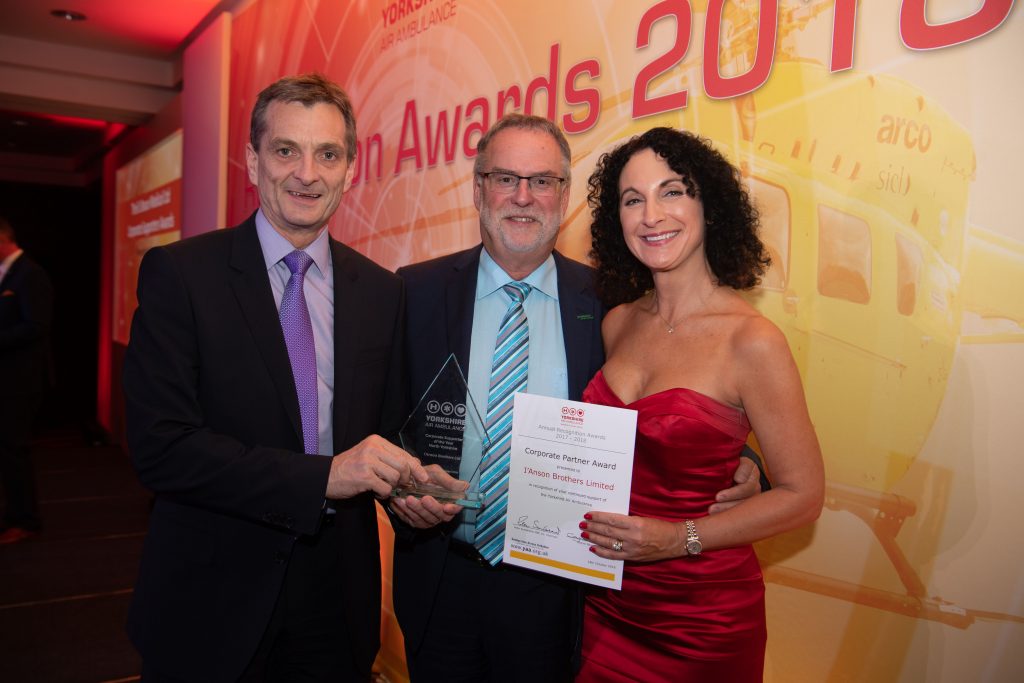 One of the UK’s leading family-owned farm feed businesses I’Anson Bros Ltd, has received a prestigious award for its incredible support for the Yorkshire Air Ambulance (YAA).

Their recognition was in the Corporate supporter category of the YAA’s annual Recognition Awards, which were held on the 18th October at the Mercure Hotel and Spa in Sheffield.

The event was hosted by ITV’s Jon Mitchell and Gaynor Barnes and saw 19 other Yorkshire-based companies, individuals and community groups recognised and awarded for their fundraising efforts across seven categories.

The first corporate award went to I’Anson for its continued support of the charity. Their donations were funded through energy saving throughout their business helped to fund night vision goggles for the air ambulance crew, which has allowed night flights to become a more regular part of YAA’s life-saving service.

“The YAA is a cause very close to heart of us and Masham people and we are honoured to receive this award. We have saved £60,000 by changing to energy saving LED bulbs at our Masham factory and we couldn’t think of a better way to spend this money than by giving it back to the community by assisting this charity in their incredible work.”

Helen Callear, the YAA’s Director of Fundraising in North and East Yorkshire added:

“Our Recognition Awards are a great way for us to thank and officially acknowledge those who go above and beyond to support the YAA.

“I’Anson have helped us not only with brand awareness by showcasing our logo on their fleet of trucks, but their generous donation has helped our fund night vision goggles for the Topcliffe operation, which has enabled us to extend our operational hours and ultimately help save more lives across the Yorkshire region. We are incredibly thankful for their support.”

The YAA is an independent charity that requires £12,000 per day to stay operating and provide the rapid response emergency service 365 days a year. Other winners of their Recognition Awards included Knaresborough Young Farmers, B&Q Distribution Warehouse in Worksop, the Fylingdales Community Cup and some standout individual volunteers.