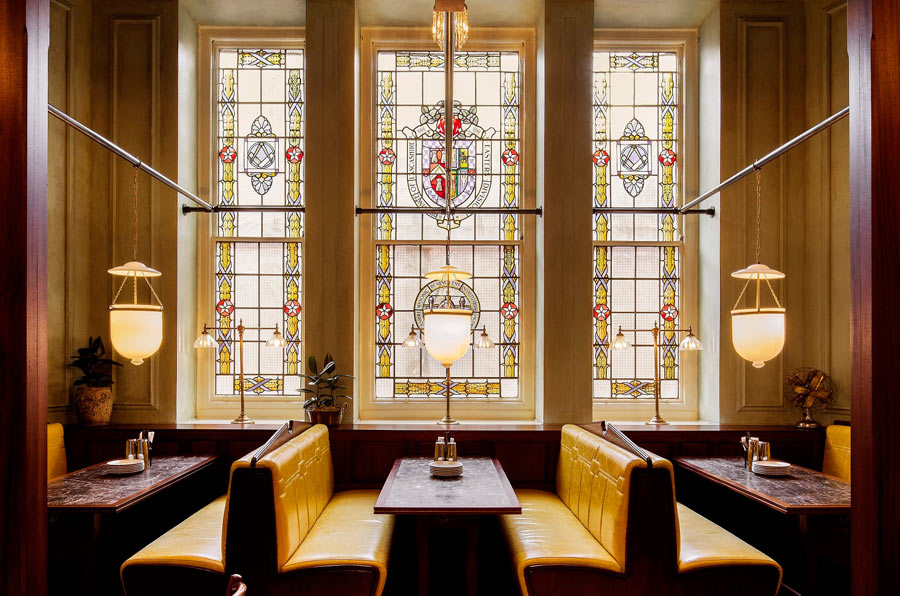 After three and a half years’ worth of planning, DishroomManchester opened on the 6th December 2018 within the Beaux-Arts-style building Manchester Hall, thanks to the design studio and interior architecture of Macaulay Sinclair, who in creating exceptional spaces for the hospitality sector and has a long-standing relationship with the Dishroom’s co-founders.

John Macaulay, the Co-director of the Nottingham-based company said:

“Helping to bring Dishoom to Manchester was really exciting for us, particularly as this is the first Dishoom outside of a UK capital city.

“Each Dishoom restaurant pays homage to the Irani cafés of Bombay, and each is inspired by ahistorical time period and narrative that we bring to life through our design. Dishoom Manchester is influenced by the freemasonry of Bombay, so we specifically visited and researched Bombay’s ’ hall from 1899 and theTheosophical Society of Bombay. The symbolism and paraphernalia of have been woven into the details, as well as using a colour palette inspired by the iconic Irani café Britannia & Co in the Ballard Estate area.”

The Co-founder of the Dishroom, Shamil Thakrar said:

“Macaulay Sinclair has been instrumental in helping us to really understand how Dishoom should express itself in a physical environment. They design spaces in completely different design languages and time periods which could only be Dishoom restaurants. They’ve been completely key in our evolution as a business.”

The 230-cover restaurant and bar a familiar aesthetic in part to other Dishroom restaurants, with frequent references to the Irani cafes of Bombay, as well as antique furniture sourced from India.

John added: “We retained the original fabric of the building to restore the grand, civic aesthetic, which has hints of academic classicism. Luckily we were able to retain many of the beautiful existing finishes, including the majority of parquet and marble floor.”

Nine portraits of the former Grand Masters of the Bombay freemasons’ hall were commissioned to hang on plinths in the dining room, which is complete with grand proportions and high ceilings.